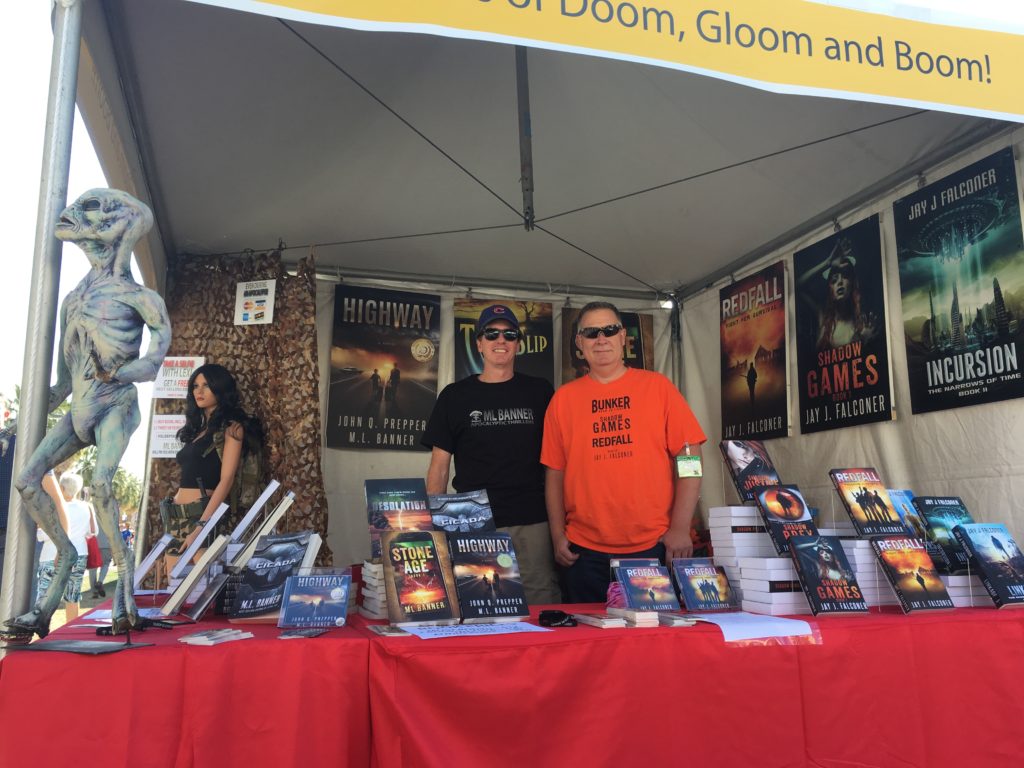 Michael & Jay – Set up and ready to sell

“Let’s go in on a booth together for the Tucson Book Festival,” my author-friend exuberantly suggested. I was incredulous because I’ve done fairs and booths before (just not book fairs), and I knew they were a big investment of time and money. So spending a weekend hawking books at our local Tucson Festival of Books, which happened to be the third largest book fair in all of the US, didn’t seem too appealing to me. At least, at first.

Then my friend said, “Hey, I didn’t know what I was doing five years ago when I did this and I sold 100 books, and I only had one book to sell.” “Mmmm,” I thought. What then could two authors, with best-selling books and award-winning credentials, accomplish?  Putting our two heads together and creating the best booth, we could do so much more. That’s when the China math kicked in: “If there’s 150,000 people, and we have a corner booth facing all that traffic, surely each of us could sell 200… maybe even 300 books or more, right?”

And “all in” I certainly was. In the ensuing months, I poured dollars and hours hashing out ideas, and buying everything that would make our both stand out and attract attention: a life-like mannequin (think a sexy Laura Croft), modeled after one of the main characters in my one of my best-selling books; two-by-three foot posters of three of my best book covers; hundreds of monogramed tote bags, bookmarks, and wrist bracelets for the kids and their parents; T-shirts, with our monograms, for both me and my wife (who agreed to come along on this odyssey); and all the booth accouterments (signs, table clothes, pens, tape, etc.) that a successful booth would need. My friend/booth-partner, did the same, including plunking down a vast sum for a Hollywood-FX made alien. And then there was all the book inventory we needed to carry. 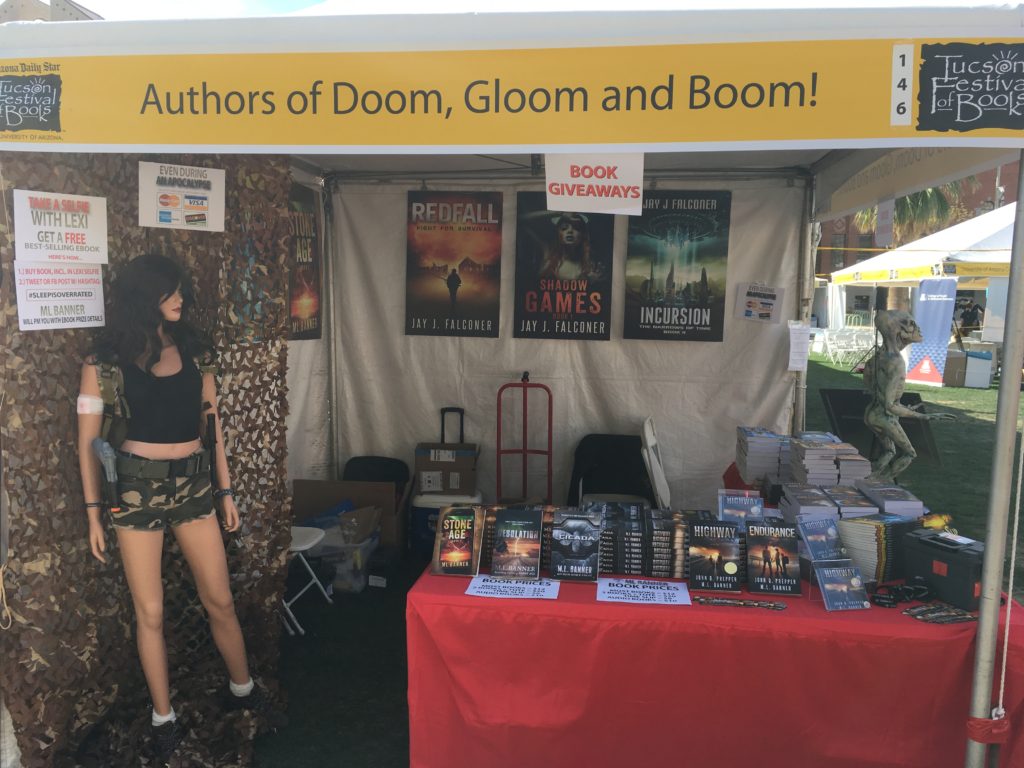 Our booth set-up on Day Two

Calculating and recalculating (using my China-math formulas), for some odd reason, I ordered 405 copies of my six books. Yeah, 405 copies (My booth-partner ordered almost 500). What could I say, we were both a little over-exuberant.

The day after
It’s now the day after, and as I sit back in my writing chair, my body still aching from the two twelve-hour days, I’m left examining my sales results versus my time and money invested. Here’s what I’ve come to realize about this book fair and probably fairs in general…

No, I’m not suffering from delirium. If you’ll recall, the great California Gold Rush brought many people from around the US, and other countries, to California to see if they could scratch out some gold and make their fortune. The word was that, “There be gold in them hills!” We all know the results of this story: few if any really found their fortune by mining gold. However, some folks made tubs of money. Who? Those who sold the pick and shovels to the miners.

Now let’s apply this to our book fair.

Yes, we probably had one hundred thousand plus people walk by our booth, but few stopped by to buy. Oh many gawked at my booth-mate’s cool-looking alien, and my Laura-Croft-like mannequin, who stoically stared back at each person. Don’t get me wrong, there were many potential readers who talked to us, touched our books, listened to us squawk on endlessly about each book’s narrative, and our “Book fair sales prices” being offered “today only.” And yes, more than a few bought our books, although still far less that I had hoped. But what struck me were two booths I witnessed from outside of our own booth.

A small booth, maybe half the size of our nine-foot-by-nine-foot booth, was selling lemonade to the hot fair-goers (it was sunny and almost 90 degrees out). From 9AM until the booth’s owner ran out of lemonade at 4PM, ten to fifty people were always waiting to plunk down $3 for something that cost him maybe $0.20 each to make (including the plastic cup, which also advertised “Lemonade”). That cash register noise rang in my head each time I looked up for another gasp of air, before I repeated the same thing over to another prospective reader…

A second instance that really hit home for me was the Author Solutions tent. It was only thirty steps from us, on the way to the bathroom—which I only used twice the whole weekend. I’ll spare you the grizzly details of this disgusting organization who rips off authors with all their services, and is owned by traditional publishers (David Gaughran does a wonderful job here detailing their scams). They somehow connived at least twenty indie authors to pay them four grand (actually $3999) each to get a one-hour book signing at their booth, where they would give seventy-five copies of their book to anyone who will stand in line and wait to get the pour shlub of an author to sign their new book for them. That’s four grand TIMES twenty authors, or eighty thousand smackers!

That’s when it hit me: the only people who really make a profit at book fairs, when you count their time and monetary investment are those who sell the “picks and shovels:” the products and services designed for us authors (to appear at book fairs) and for our potential readers (to attend book fairs). It’s definitely not the sellers of the actual books who will make a profit.

How’d we Really Do? (Updated on 3/21/17)
I’m not saying that we didn’t sell our books. By most standards, we did… decent. I sold 120 copies of my books and audio CD’s. My author friend sold a little more than I did. And as he emoted after Day Two (we  had changed our configuration to make it easier to sell an entire series), “We could have sold more had we done this in Day One.” This is certainly true. However, we wouldn’t have sold double our totals. And in fact, when you calculate the amount we each spent in our booth and our book/CD inventories, and subtract out unused inventory (which now takes up space in my office), not to mention the gray matter I’m using trying to figure out how to unload these, I still lost money. Even if I sold every book and CD I had on hand for the average net price I had received–that’s 548 sales–I might have broken even, at best.

Other Buzz
Of course one uncalculated variable some would argue goes like this: “Think of all the buzz you’ve created for your books and the accompanying sales which occurred after words.” There is some truth to this. But when I look at my online physical & digital book sales, there was an increase, albeit slight. Assuming this was all attributable to the book fair, we could add maybe 10 or 20 copies to our overall totals (I’m being overly enthusiastic here). Still, it’s not a difference maker.

There’s also the factor of what these new readers (who bought our books) will do to future sales: buying our subsequent books, telling others about their new favorite author (we can only hope, right?), etc. But really how much can we expect from this? Unless we are lucky enough to snag a few new “super fans,” this won’t add much to our totals.

The Value of My Time
Here’s where this whole concept of selling at book fairs, becomes a house of cards (or paper-thin books), crashing down on itself. My time is worth a lot! Even if I sold 1000 books, which is pure fantasy–I don’t write fantasy, when you factor in the value of my time alone (not even counting my wife’s time, and she makes more than I do), it’s still not worth it!

I spent untold hours, planning for the Tucson Book Festival, and two very long days setting up, hawking books, and tearing down our booth (again, so did my wife). And even if I sold 1000 books (remember, I only sold 120), I would be better off doing the one thing which is actually profitable in the self-publishing business… WRITE MY NEXT BOOK!

Sit down and calculate what you made on one of your books and then divide it by your hours to create that book. I did, and found out that I make much more writing than when I invest my time into any other self-publishing activities, especially selling books at book fairs.

Summary
Am I saying to all authors, “Never rent a booth at a book fair?” No! But what I am saying is, if you think you’ll go to a book fair and sell enough books to pay for your monetary investment, and much more precious, your time investment, you’re fooling yourself. Now, if you want the experience to meeting prospective readers, autograph books for them, be a part of a vibrant community of readers, and maybe sell a few books too, then go for it. But if you’re looking at your writing as a business (along with it being a passion), you’re much better off investing your precious time into writing your next book. That’s my plan.

Now, if I could only figure out what to do with a sexy mannequin and a couple hundred copies of my books?